From Quimbanda to Tantric Buddhism

From Quimbanda to Tantric Buddhism. My spiritual journey to the red Enchantress Kurukulla.

At a certain point in my spiritual journey, two paths, Quimbanda and Vajrayana Buddhism, which seemed to be completely opposite, intersected, integrating with each other in a completely unexpected way. This fact lead me to further my research especially from a philosophical and anthropological point of view. In this webinar I would like to share my experience as a practitioner since I encountered a wonderful and powerful spirit known as Maria Padilha of the Souls. I can say that this encounter changed completely my idea of spirituality, but this was for me a difficult process of perceiving new realities that lead me to question all that I had learned until then.
After a time of struggling with my beliefs and my logical way of perceiving my reality, questions like what is the meaning of a spiritual path or what is to be a practitioner embarked me in a process of exploring new techniques in a more holistic way. In certain moment the events of my life put me in contact with Reiki and I became a Reiki Master. When I started to live Reiki as a spiritual path all things started to make sense for me, and I discovered a new way of living spirituality. Through Maria Padilha of the Souls I was introduced to a new energy that lead me to discover the marvelous Kurukulla.
Kurukulla is a goddess of tribal origins, initially venerated as a protector by various nomadic clans who related her to fertility and material affairs, yet also considered her dangerous and fearsome. Progressively, the goddess was incorporated into the Buddhist pantheon, and during this process, Kurukulla acquired some different roles and lost others. Many practices were developed related to issues such as protection against animals and certain diseases, obtaining influential positions in society, love affairs, and even getting rid of one’s enemies. Kurukulla is a deity considered the goddess of eroticism, the mistress of enchantments and bewitchment, who uses desire as a weapon for transcendence. Practicing with Kurukulla allows us to reach our true nature by making our daily life, our fears and weaknesses, the very source of liberation.
At the end of this webinar, we will perform a short invocation which is intended to openly and freely establish a connection with the deity. It will be presented in a simple and understandable way. We will also talk about other ways of establishing contact with the deity such as offerings, devotionals and the importance and meaning of meditation from a Tantric perspective.

– Introducing myself
– Starting to walk a spiritual path.
– Brief introduction about the Afro-brazilian cult known as Quimbanda. Exu and Pombagira.
– Tantric Buddhism and the role of the Dakini.
– Comparative analysis between Pombagira and Dakini.
– How Maria Padilha led me to the goddess Kurukulla.
– Kurukulla as a goddess of Magic and bewitchment. Historical background. Iconographical analysis.
– A short invocation using part of the practice of my book. 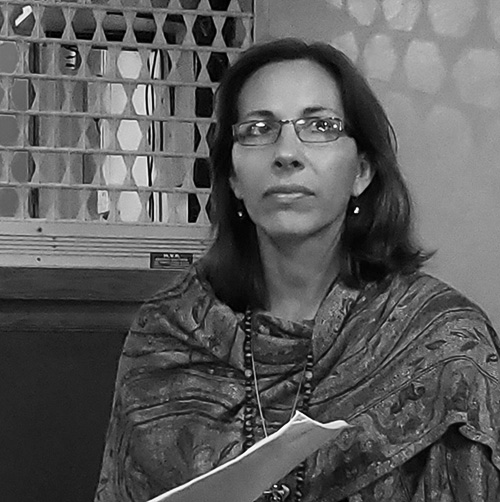 Verónica Rivas (Melong Yeshe) is an Uruguayan author and researcher based in Brazil. Her cosmological and anthropological studies in magical practices among Eastern cultures led her to become interested in healing techniques. When she became a Reiki Master, she started to research the possibilities of integrating Reiki techniques with other forms of energy work, using her academic training in Philosophy as an epistemological background. Verónica is also an initiated practitioner of Vajrayana Buddhism (Esoteric Buddhism), focusing her practical work in the deity known as Kurukulla. Currently, her research is focused on female deities and spirits of the Vajrayana and Hindu traditions, and Maria de Padilla and her connection with Quimbanda.

BACK TO WEBINARS
We use cookies on our website to give you the most relevant experience by remembering your preferences and repeat visits. By clicking “Accept”, you consent to the use of ALL the cookies.
Read MoreACCEPT
Manage consent

This website uses cookies to improve your experience while you navigate through the website. Out of these, the cookies that are categorized as necessary are stored on your browser as they are essential for the working of basic functionalities of the website. We also use third-party cookies that help us analyze and understand how you use this website. These cookies will be stored in your browser only with your consent. You also have the option to opt-out of these cookies. But opting out of some of these cookies may affect your browsing experience.
Necessary Always Enabled
Necessary cookies are absolutely essential for the website to function properly. This category only includes cookies that ensures basic functionalities and security features of the website. These cookies do not store any personal information.
Non-necessary
Any cookies that may not be particularly necessary for the website to function and is used specifically to collect user personal data via analytics, ads, other embedded contents are termed as non-necessary cookies. It is mandatory to procure user consent prior to running these cookies on your website.
SAVE & ACCEPT